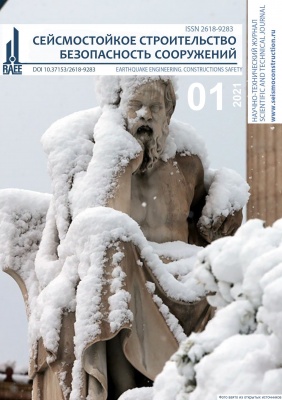 
The advantages and disadvantages of the NEHRP soil classification

The influence of local ground conditions on the parameters of seismic vibrations is the subject of study in seismic microzonation. This section of engineering seismology underwent radical changes at the end of the last century. The Commission on Seismic Safety of the National Institute of Building Sciences of the United States, as part of the implementation of the National Earthquake Damage Reduction Program, developed new NEHRP Recommendations, which are significantly different from all that has been used in the world practice of anti-seismic construction. The main provisions of this NEHRP classification have been adopted in many national building codes, including Eurocode 8 and Kazakhstan's seismic regulations. One of the essential features of the classification is the use of the average values of the velocities of transverse waves and the densities of the ground thickness with a thickness of 30 meters. In Russia, the provisions of the NEHRP norms have not yet been properly developed. Currently, the issue of extending the norms of Kazakhstan to the entire territory of the CIS countries is being considered. For this reason, the article examines in detail both the advantages and disadvantages of the NEHRP Recommendations in order to extract useful experience and adapt to the realities of Russian anti-seismic construction. In particular, the error in the representation of the parameters of the soil mass by average values is shown. The ways of overcoming the identified shortcomings of the description of the soil mass with the help of model representations are outlined

Linear-spectral method (LSM) is still the common method for the seismic design analysis. "One-component one-mode" responses, obtained by static analysis in the conventional variant of LSM, are combined twice: first for different modes but for each single excitation component separately, then for the different excitation components. In the alternative LSM variant presented in the Russian code SP 14.13330, first one chooses the "most dangerous" direction of the one-component excitation for each mode; then calculates the "one-mode" response for this excitation, and finally these responses are combined. In both cases the combination is performed using the complete quadratic combination (CQC) rule. Different documents suggest different formulae for the correlation coefficients. In the paper different formulae are compared to each other. The goal is to limit the number of calculated coefficients and decrease the amount of calculations.

The question of setting the seismic design input on high rise buildings is considered. The existing approaches to accounting for increased responsibility of high rise buildings in Russia are described. The proposal to reduce the probability of an acceptable building failure in proportion to the number of floors and Guideline proposals to increase the reliability factor and using maps of general seismic zoning are analyzed. The main disadvantages of methods described are indicated. It is shown that the current regulatory documents in the field of earthquake engineering do not provide the same reliability of designed structures in general and high-rise buildings in particular. The influence of seismic dangers in according with seismic zoning maps on the reliability of the designed objects is noted. An approach to generating the design input based on the permissible probability of its exceeding is considered using the example of five five-storey buildings and one 25-storey buildings. The probability of the admissible damage value included in the normative calculations is estimated. An estimate of the allowable failure probability on the value of acceptable damage (risk) is proposed under the assumption of a normal distribution of damage caused by earthquake. It is shown that the allowable failure probability decreases with decreasing acceptable damage only in the area of small damages. An approach to the assignment of seismic action based on an assessment of seismic risk has been formulated. The system of design coefficients used to calculate seismic loads on high-rise buildings is analyzed. It is noted that along with an increase in the design level of seismic acceleration, it is necessary to increase the coefficient, taking into account the low damping of high-rise buildings oscillations. At the same time, it is possible to significantly reduce the reduction coefficient by regulating the strains between the building floors.

The article discusses the most suitable base
isolation bearings from the author's point of view for use in the buildings of
old mosques in Syria, which are designed to protect such buildings from the
effects of earthquakes that can occur at any time. Especially since many of
such buildings have an architectural and cultural value, and are included in
the world heritage list of UNESCO. Elastomeric
bearings with high energy dissipation capacity (HDRB), elastomeric bearings
with lead cores (LDRB), single friction pendulum, double friction pendulum and
triple friction pendulum sliding (FPS) bearings are considered. What they
consist of, their characteristics. Three, mosques in Syria that are of a great
value from the point of view of architecture and cultural heritage are listed
and described, and conclusions are drawn.

The article discusses a method for analyzing the risk assessment of failures of the structure as a system by developing a "Fault Tree Analysis". Formulas were proposed for the numerical estimation of the probability of system failure, taking into account the stochastic dependence of the failures of its elements. On the example of a nuclear power facility, a "wet" stand-alone storage facility for spent nuclear fuel, an analysis of possible scenarios of a facility failure was carried out, a "Fault Tree Analysis" was developed and calculated under seismic impact. It has been determined that the risk of structure as a
system under seismic impact is determined by the risk of falling process
equipment and building structures on the overlap of storage compartments or
stored nuclear fuel. To increase the safety of building structures under
seismic impact, it is necessary to pay special attention to the design features
of the frame part and the interface between the monolithic storage compartment
and the frame part, as the most vulnerable link.