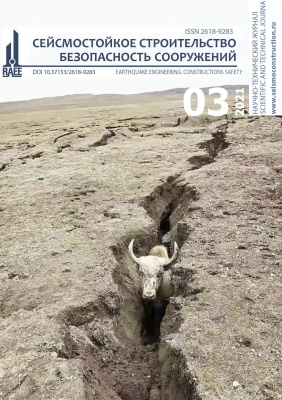 The
interference of incident and reflected seismic waves in the ground massif near
the day surface is the cause of resonant effects. In the practice of seismic
microzonation (SMZ), a resonant increase in the total seismic intensity is of
particular importance. At the same time, the presence of inverse layers in the
ground layers interference leads to a decrease in the intensity of the total
seismic impact, what is naturally named antiresonance. The article considers
the conditions for the occurrence of antiresonance and evaluates the limits of
its effectiveness. The natural and man-made causes of antiresonance and the
possibility of using it to reduce the intensity of seismic impacts are
particularly noted.

The technique of the algorithm of filtering from the noise of the source data is considered. As an efficiency of this filtering algorithm, a comparative analysis of the dynamic coefficient and the energy criteria of the pulse and Arias for the corrected and instrumental accelerograms is carried out.


Use of recycled tires for earthquake protection of structures

The article presents numerous structures of earthquake-resistant foundations that have been developed by the authors and other engineers over the past more than 30 years, in which recycled metal-cord tires are used. The designs of dynamic dampers of dynamic vibrations, in which the containers for bulk fillers are made of recycled tires, are presented. Recycled tires are also effectively used in the creation of earthquake shields, as well as reinforcing elements and seismic insulation

layers of earthquake-resistant ground dams. In all the above-mentioned technical solutions, the earthquake resistance of buildings and structures is achieved due to the unique geometric and physico-chemical-mechanical properties of recycled rubber tires with a metal cord.

With budget funding for two years in 2017-2018, the total certification of the housing stock of multi-apartment buildings was carried out for the first time. A total of 8,171 buildings were entered into the database, of which 1,847 are multi-storey frame buildings of various storeys and

faults on the territory of the city. The hypothesis is accepted that buildings located in the zone of tectonic faults will be destroyed. Under these conditions, quantitative estimates of the failure probability and reliability values for frame buildings of various types were obtained for the first time. The frequency of earthquakes is taken into account according to the current "Map of seismic zoning of the Republic of Kazakhstan". The results of the reliability and failure estimates are used for practical recommendations to reduce the risk and expected losses in possible earthquakes. Total reinforcement of frame buildings with the first flexible floors (59 buildings) is proposed. However, the conditional probability of failure for a group of residential frame buildings will remain non-zero. The method of amplification should be determined based on the results of experimental studies.

The paper presents a method of using the reduction factor to ensure the stability of monolithic reinforced concrete bearing structures to progressive collapse.

Studies have established the values of the reduction factor based on the accepted value of the relative deformation corresponding to the formation of an admissible zone of "destruction" of the support section of the overlap under the action of transverse forces, as the main criterion for asessing the stress-strain state of monolithic reinforced concrete structures for the failure mode of a vertical supporting structure.

The accepted deformation criteria for a special limiting state correctly reflect the conditions for the formation of an admissible amount of damage to elements of bearing reinforced concrete systems.

The reduction factor (K1) obtained in the framework of the research performed is the most important deformation characteristic of the special limiting state of monolithic reinforced concrete bearing systems of buildings and structures for an emergency design situation associated with the failure of a local structural element.