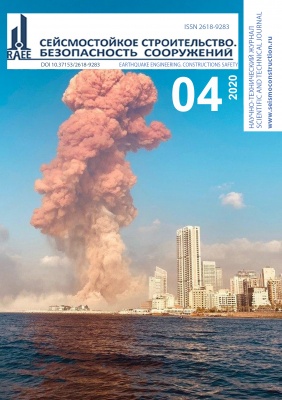 The article considers the initial Cauchy problem for a fractional differential equation with a variable coefficient and its numerical solution is applicable in the problem of developing an oil well to determine the pressure change with increasing distance from the well. The parameter of the proposed mathematical model for a specific well was identified based on experimental data. The parameter of the mathematical model was determined by solving the problem of approximating empirical data using the least squares method.


THE EFFECT OF NORMAL ADHESION ON THE STRENGTH OF A CELLULAR CONCRETE, INCLUDING SEISMIC INPUT

The article describes research on the influence of normal adhesion on the strength of cellular concrete masonry. The performed tests and test samples are described. The results of the tests carried out to date are also presented. Further measures to study the effect of normal adhesion on the load-bearing capacity of cellular concrete masonry, including seismic impacts, are indicated.

The article provides
an overview of the use of tuned mass dampers (TMD) in some of the most famous
buildings and structures around the world for nearly three decades. The article
also discusses the use of tuned mass dampers when increasing the seismic
resistance of mosque minarets and enhancing their resistance to wind action. An
example is given of the possible use of such dampers in the minaret of the Great Mosque
of Aleppo in Syria, using as an example the parameters and characteristics of the
devastating earthquake that occurred back in 1995 in the city of Kobe in Japan.
The optimal characteristics of the components of the tuned mass damper used to
enhance the stability of the minaret of the aforementioned mosque against
seismic and wind impact have been selected. The results of the analysis are
obtained and conclusions are drawn.

The author derives
the equation of planar vibrations for kinematical rolling supports of varying
curvature radius. Both support and the surface below are assumed rigid; no
sliding assumed. Generalization means arbitrary geometry of the support and
rolling surface (the building is attached to the supports by hinges, as
previously). The equation of motion developed is checked with free and forced
vibrations of the support with two curvature radii (great radius in the central
part and small radius in the side parts). Such a support in the limit case
(when great radius goes to infinity, and small radius goes to zero) models the
support after A.М.
Kurzanov with planar bottom and finite size in plan.

EFFECTS OF ANOMALOUSLY WEAK AND STRONG AMPLIFICATION OF SEISMIC WAVES IN SOIL LAYERS, WITH THE EXAMPLE OF TWO STATIONS OF KIK-NET STRONG MOTION NETWORK OF JAPAN

Experimentally observed effects of anomalously weak and strong amplification of seismic waves in soft subsurface soils are studied using the records of KiK-net seismic vertical arrays (of strong motion network of Japan). The amplification was estimated based on peak ground accelerations recorded during ~20 earthquakes at each station. To interpret the obtained results, we engaged models of soil behavior at these sites during the Tohoku earthquake on March 11, 2011.

The general conclusion that can be drawn from the obtained results is that the effect of the three mechanisms of seismic wave transformations in soil layers largely depends on the composition of the soil down to depths of ~100 m.

In 2017-2018, for the first time in the city of Almaty, a complete certification of the housing stock of apartment buildings was carried out. 1607 multi-storey brick buildings 2-4 floors high were identified. Based on the results of certification, quantitative estimates of the probability of failure and reliability for brick buildings were first obtained. The frequency of earthquakes is taken into account. A priori probabilities of brick buildings failure were calculated by statistical modeling using experimental data obtained during the recording of explosions in MEDEO. The results of reliability and failure estimates will be used for practical recommendations to reduce risk and expected losses in possible earthquakes.