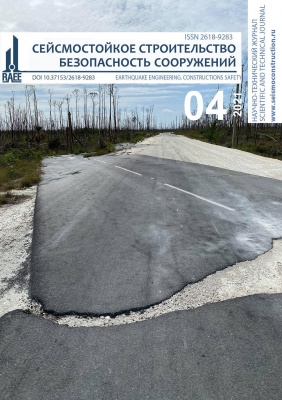 The analysis of the regulatory documents of the Russian Federation in terms of the requirements for accounting for the responsibility of buildings and structures when calculating for seismic impacts is given. For discussion, an approach is proposed to the differentiated assignment of the responsibility coefficient Kо for individual structural elements (columns) of a multi-storey monolithic reinforced concrete frame building when determining calculated seismic loads. Based on the results of calculations for an emergency settlement situation associated with the expected initial local destruction of the column, taking into account its different location in the plan and height for the columns, the values of the coefficients of significance of the location in the plan and the location in height are determined, taking into account the analysis of the calculated volumes of destruction, and are further used to clarify the values of the coefficients of responsibility Kо.

According to the existing practice of composite structure design, shear connectors, which provide an interaction of supporting steel beams and reinforced concrete slabs, can be considered as ductile or non-ductile. Taking into account the ductility of connectors allows designer to create an optimal structure from an economic point of view and increase its earthquake resistance. Within the framework of this study, the results of push-testing composite specimen conducted by the authors earlier are considered. The powder-actuated shear connectors had been used for providing interaction between the steel and reinforced concrete parts. In conclusion, the assessment of the ductility and expediency of using powder-actuated shear connectors for earthquake-resistant construction is given.

Based on the calculation justification and analysis of experimental data, it is shown that in silos, as in hydraulic structures of cellular construction, as a result of seismic influences, in addition to inertial mass forces and alternating pressures of the filler on the walls, additional pressures associated with an increase in its hanging on the walls and the redistribution of loads that persist for a certain time may arise. The resulting pressures on the walls can be determined according to the author's formula and for a sand aggregate exceed static ones: 1.57 times – lateral, 1.2 times – vertical, associated with the development of friction forces The reason for the occurrence of load redistribution is the development of friction forces at the walls, which occurs as a result of aggregate precipitation during vibration compaction as a result of seismic influences. This phenomenon can be observed in silos, in which large values of dynamic coefficients arise during fluctuations. Calculations supported by experimental data show that under 9-point seismic impacts, the redistribution of loads with an increase in pressure to the above values can be observed along the entire height in silos with sand aggregate up to 25 m high with a diameter of 3m to 6 m, and in silos with a diameter of 8 m – in the upper part to a depth of 13 m. At 8-point seismic impacts, this phenomenon can occur in silos with small diameters of 3m and 4m with an increase in pressure in their upper part with a depth of 3m to 5m, and at 7-point – it covers only the upper part of structures with a depth of 1...1.5 m, that is, practically absent.