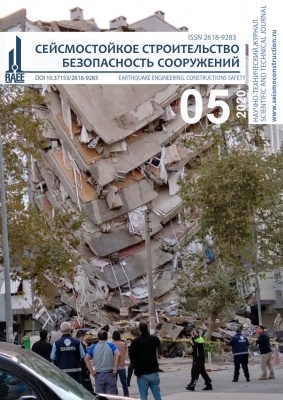 In engineering approaches to calculating the seismic resistance of underground structures, in particular pipelines, it is important to find experimentally the forces of interaction with the ground, as this frees us from the need to solve a difficult dynamic problem for the ground (elastic or having more complex mechanical properties). In this work inaccuracies are corrected and further development of the known from literature theory of quasistatic experiment for determining the coefficient of longitudinal interaction of soil and underground pipeline in seismic problems is given. It is shown that only the second approximation for the named coefficient in the expansion with a small parameter, equal to the ratio of the length of the pipe sample to the length of the seismic wave, takes into account the longitudinal deformation of the pipe; the first approximation corresponds to the experiment with an absolutely rigid pipe.

A
strict reduction of the seismic problem to the problem for relative pipeline
movements is presented. Conditions are found on the external (remote from the
pipe) boundaries of the soil, the fulfillment of which ensures the correctness
of determining the coefficient of longitudinal interaction for seismic problems
in experiments

Equation of planar vibrations of rigid structure on kinematic supports after A.M. Kurzanov

The author derives the equation of planar vibrations of rigid structure resting on kinematical pendulum supports with planar bottom (after A.M. Kurzanov). Both support and the surface below are assumed rigid; no sliding assumed. One of the coefficients in the equation (i.e. coordinate of the rotation center) proves to be piece-wise constant. The equation is of the hyperbolic type with parametric terms. Even linearization of this equation does not bring it to the conventional equation of the SDOF oscillator. Principal difference is that the free vibration period depends on the amplitude. The equation is checked for free and forced vibrations. Similar problem is for the seismic response of the unanchored items. For the further research the experimental data about damping are of great importance: both for rotation and the gap closing.

This paper provides the summarized geophysical and engineering-geological data obtained from the project studies and engineering survey of large infrastructure facilities. For illustrative purposes, the paper deals with the analysis of different combinations of engineering-geological and seismic environments with regard to recommendations for general seismic zoning (GSZ) of aerodrome complexes in Siberia and Mongolia. The authors considered the possibility of overall impact of near-surface layers on the project studies and engineering survey of large infrastructure facilities and potential applicability of the geophysical methods in determination of seismic hazard level for the facilities studied. The probability of prediction of the impact of near-surface engineering-geological section on the level of manifestation of seismic properties of certain types of soft sediments and rock formations is based on the study of main parameters of geophysical fields directly within the studied facilities and regions as a whole. The initial data for substantiation of engineering-seismological conditions in monitoring large facilities studied were obtained from the integrated instrumental geophysical measurements (seismic and electrical surveying, microseismic recording) and theoretical calculations. The results of a large volume of geophysical research conducted in the near-surface geological sections of large infrastructure facilities are summarized and presented in the tables of ground conditions in natural and artificial environments. The results presented as variants of seismic design parameters for the summarized engineering-geological sections, seismic properties of typical grounds and parameters of seismic design models of typical sections allow determining seismic hazard level for large civil and industrial facilities. Generalized results of complex geophysical studies, showed the possibility of their use for design and engineering seismological surveys and assessment of the level of seismic danger, in the parameters of seismic impacts, for large industrial and civil facilities in Mongolia and Siberia.

The article describes and discusses in detail the process of inspection and testing of the railway bridge on the Uchkurgan – Tashkomur stage km 17+494, carried out by specialists of the Kyrgyz State University of Construction, Transport and Architecture (KSUCTA) on the basis of the contract  with  the Mostootryad  SE NK Kyrgyz railway for the purpose of assessing the technical state of pavement design, evaluation of its conformity to requirements of standard documentation and preparation of technical findings with conclusions and suggestions for further exploitation of the bridge and increasing its operational safety.