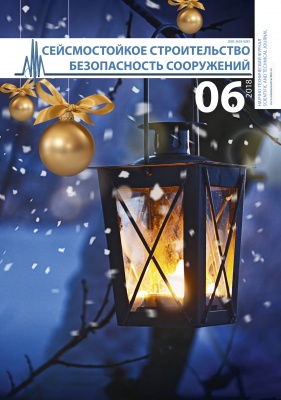 
The Combination Coefficients of Seismic and Wind Loads

The combination coefficients of seismic and wind loads for multilevel designing buildings and structures in high seismic regions are considered. For design and maximum design earthquakes equiprobable pairs of seismic and wind loads are determined.  Correspondingly, these pairs are iven coupling coefficients for the loads under consideration, which determine the dependence of one combination coefficient on the other. In constructing the equiprobable pairs, the wind load is described by Weibull law and seismic load is described by Poisson’s law. It is shown that for the seventh wind zone with high seismic intensity in calculating structures under the action of the esign earthquake, the combination coefficients are close to 1, and in calculating structures under the action of the maximum design earthquake they are less than 1, and therefore it becomes necessary to choose the most dangerous pair of seismic and wind loads.

The stations of the engineering seismometric service of KazNIISA JSC recorded more than 15 lo-cal earthquakes with the foci in Almaty and Almaty region in 2018. Accelerograms recorded on rigid and flexible buildings during 3 sensible earthquakes were selected from the obtained instru-mental records. These are accelerograms recorded in the basement parts of a four-storeyed frame building and an 11-storeyed steel-framed building. In one instance, the instrumental rec-ords registered in the basement of a 17-storeyed building are used. Flexible buildings are locat-ed near tectonic faults. The spectral curves characterizing the frequency content of the seismic effect are built. It has been established that the frequency response characteristics of the foundation composed of soils of the 2nd category by seismic properties are high-frequency with prevailing periods of 0.1-0.20 sec. Resonance phenomena for flexible buildings under the influence of local earthquakes are not observed. Instrumental records are included into the accelerogram database of KazNIISA JSC.


Updated Assessment of Seismic Hazard for the Areas of Kolsky Peninsula and Karelia, Based on Records of Local Earthquakes

Updated accurate estimates of seismic effects from scenario earthquakes are obtained for the areas of Kolsky peninsula and Karelia; calculations were carried out with regional characteristics of radiation and propagation of seismic waves that were estimated based on records of local earthquakes. Seismic intensity, peak ground accelerations and velocities, response spectra, and other characteristics are estimated from acceleration time histories of motions on the surface calculated by stochastic method. Higher estimates of seismic intensity and peak ground accelerations and velocities were obtained, as compared to the estimates obtained earlier and based on world-average characteristics or from areas with similar geological structure. The main cause of the obtained differences and high new estimates of seismic effects is neglecting in past studies high values of the stress drop, ??~bars, typical for this region.

Combined Asymptotic Method (CAM) has been developed and used for SSI analysis of stiff and heavy NPP structures. However, some of civil structures nowadays are comparable with NPP structures in terms of size and mass. The question is whether SSI is significant for such structures and whether it should be accounted for in the design process. In the previous two papers CAM was applied to the seismic analysis of the high-rise structure resting on a sample homogeneous half-space modeling soil. The overall impact of SSI or, in other words, the applicability of the fixed-base seismic analysis was studied. In the present paper two specific features are investigated which make horizontal/rocking seismic response of the high-rise building completely different from the vertical response of the same building and from the total response of the conventional NPP buildings. Maximal integral horizontal forces under the base are several times less than vertical force though maximal horizontal base accelerations are greater than vertical one. Transfer functions to the horizontal base response show little peaks at the lowest natural frequencies corresponding to the dominant modal masses. Rocking stiffness of the soil proves to be more important than the horizontal one. Due to the low first natural
frequencies, the response along the first modes is overcritical and out of phase – as a result, the corresponding modal mass is subtracted from the total “rigid” mass. Base rocking is also out of phase and leads to the decrease in deformations in the lower part
of structure.

In dynamic process the behavior of construction depends on their surface of fluidity. In article analytical decisions for a rigid plasticity system with two degrees of freedom in case of dynamic problem definition when external influence has impulsive character (initial
speed of a system is set) are received and analysed. The mathematical model of a rigid plasticity system dynamic behavior at account and not accounting of interaction projections of plastic reactions effect are provided in article. The interrelation between these approaches is found. An assessment of construction operability is given and also limit cases of the received decision are considered. Comparison with the simplified problem definition upon transition from elliptic to rectangular curve fluidity is carried separately out.