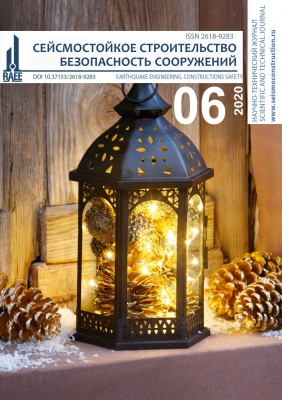 The article is devoted to issues related to the probabilistic justification of the safety of nuclear power plants (NPP) when a high-speed military aircraft falls. The random parameters are the recurrence of falls and the direction of the aircraft's trajectory. The conservative value of the recurrence of falls, given in the IAEA documents, was used, which ensures a high degree of NPP safety. The aircraft approach is assumed to be equally probable from either side. The trajectory slope is specified taking into account the IAEA documents and statistics of aviation accidents.

The aircraft impact load is applied to one of the structures, therefore the impact probability must be determined independently for each of them. It is proportional to the equivalent area of the building structure, depending on its size, shape, position in space and in relation to other structures. Expressions are given for the equivalent areas of structures of various shapes, typical for NPP. It is shown that if the aircraft crash is unintentional (accident), then with the usual dimensions of structures, the probability of an impact in them is less than the value, starting from which, according to Russian standards, it must be taken into account in the design basis of the NPP, i.e. it can be ignored. Dependencies are given for calculating the probability of an aircraft strike in the case of a deliberately organized accident (terrorist attack), in which the aircraft will surely fall on the territory of “Nuclear Island” of the NPP.

The procedure for setting the design loads on the building structures of a NPP in the case of a deliberate aircraft fall based on the allowed probability of their realization is described. It is shown that this method of setting the loads makes it possible to substantiate their significant reduction, which leads to a reduction in the cost of the NPP while guaranteeing its safety. A probabilistic assessment of structures safety of existing NPP in the event of an aircraft impact is discussed.

The author carries out parametric studies for the equation of planar vibrations of rigid structure resting on kinematical rolling supports with planar bottom (after A.M. Kurzanov). Both support and the surface below are assumed rigid; no sliding assumed. Varied parameter is the width of the bottom. Horizontal structural acceleration is studied. Three variants of the possible behavior are shown: (i) minor rocking with little decrease in response accelerations as compared to the initial excitation; considerable rocking with considerable decrease in the response accelerations; intensive rocking leading to the overturn of the supports. In vertical direction there appear shocks (infinite accelerations) during gap closings of the supports. The importance of the problem for the seismic response analysis of the unanchored items is noted. The author gives recommendations for the experimental program, aimed to obtain data about damping both for rotation and for the gap closing, and also about the impact of the flexibility of the supports and underlying surface.

The frame assembled from «H» elements

The general characteristics of the structural system of a full-assembly frame of "H" elements for the construction of residential buildings are described. "H" element is a hybrid of two columns, each is one storey high, join to monolith with the joist. The junction of the columns is located in the middle of the floor height. These elements are assembled to structural cells with longitudinal, transverse or cross-arrangement of bearing frames. Joints of columns with joist are rigid. The overall spatial stability of the frame is provided by the layout of the frame elements, as well as the use of various kinds of connections. Slabs are prefabricated. Connections of "H" elements are made by the ties with the use of screw reinforcing bars.

The article provides an overview of historic masonry towers such as the minarets of mosques, bell towers of churches, clock towers, leaning towers, so-called "falling towers" and ruined towers. It was considered what kind of masonry, what kind of mortars the Romans, the ancient Egyptians, the Inca and Mayan cultures in America used. Some aspects of seismic vulnerability of masonry towers were studied. The modes of destruction of thin masonry structures, mechanisms of destruction of masonry in
towers are considered, the seismic behavior of historical masonry towers are
considered, and one of the methods of seismic strengthening using an innovative "smart"
material is presented.

The area of Tajikistan is 143.1 thousand km2, while about 93% of its territory is occupied by mountains, the maximum heights of which reach more than 7000 m above sea level. The rest of the country (7%) is plains and valleys with heights from 300 to 1000 m above sea level. Such a significant range of heights is explained by the location of the study area in the junction zone of the Tien Shan fold system and the Alpine-Himalayan belt and leads to a wide variety of geological, hydrogeological, landscape-climatic and seismic conditions, analysis of the consequences of destructive earthquakes is of great importance for solving scientific and practical problems in the field of seismology, as well as problems of earthquake-resistant construction. The analysis of consequences of destructive earthquakes is important for solving scientific and practical tasks in the field of seismology and problems of earthquake engineering. One of the main sources of seismic resistance assessment of buildings and structures, along with theoretical and experimental studies, is engineering analysis of the consequences of strong earthquakes. This article deals with the effects of earthquakes on the earth's surface. The example of the following devastating earthquakes that occurred in Tajikistan, the impact of these seismic events on various types of residential buildings built from local materials is considered, and the main reasons for the observed nature of deformations and destruction are discussed.


Index of Articles Published in the Journal «Earthquake Engineering. Constructions Safety» 2020, no. 1 – 6