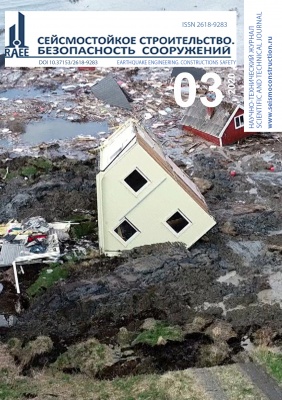 Probabilistic Assessment of Reliability and Risk Values by Certification Results

For the first time in Almaty full passport of apartment stock of multiapartment building was carried out. The structure of the housing stock was revealed with the allocation of groups of buildings according to structural solutions and assessment of their seismic resistance. Based on the results of certification, quantitative estimates of failure probability values for different types of buildings were obtained. Formulas for estimation of quantitative value of seismic risk are obtained. The number of deaths in the estimated zem-shakes was estimated. The results of the assessments will be used for practical recommendations to reduce risk and expected losses in possible earthquakes.

The solution of a single-storey industrial building, of working with significant horizontal seismic vibrations. Earthquake building carried out by separating the sole-plate foundation resting on the ground, from the rest of the multi-stage foundation for the frame column. The gap formed by constructive in the individual cells are arranged point-balls bearings, have freedom of movement in the horizontal plane. Under horizontal vibrations of the earth and the sole-plate the rest of the basement and the building itself remain at rest. It noted an interesting fact: the performance and reliability of the proposed solutions of seismic stability of buildings received unexpected confirmation,  that one of the buildings in the Chilean capital of Santiago, built in the sixteenth century, survived dozens of earthquakes, is the oldest building and it became clear that its ancient walls are mounted on ball-shaped stones.

Authors:    Shamil A. Khakimov
Rubric:     Design, building and reconstruction of a seismic constructions

The article examines the application of new design systems in seismic areas and the suitability of seismic standards for their design.


The Analysis of a Structure Subjected to Seismic Action, Taking into Account the Change in the Structure's Design in the Vibration Process

The author derives the equation of motion for a structure resting on kinematical pendulum supports of Yu.D.Cherepinsky. Both structure and supports are assumed to be rigid; no
sliding is assumed during rolling. Two components of seismic excitation are considered (horizontal one and vertical one). Equation of motion for free vibrations looks like that of the free vibrations for massive pendulum support standing alone (it was studied earlier). It is fact the equation of motion for pendulum, but center of rotation, inertia moment and stiffness are varying with time. This equation may be simplified to the linear one by skipping the second
order terms. The equation of motion for seismic response after linearization is the extension of the Mathieu-Hill’s equation, where horizontal component is responsible for the right-hand part (in the conventional Mathieu-Hill’s equation it is zero), and vertical component creates parametric excitation in the left-hand part. In fact, vertical seismic acceleration modifies gravity acceleration g, which controls the effective natural frequency for pendulum.
Thus, there might appear dynamic instability (though without infinite response due to the finite duration of excitation). The author presents numerical example.