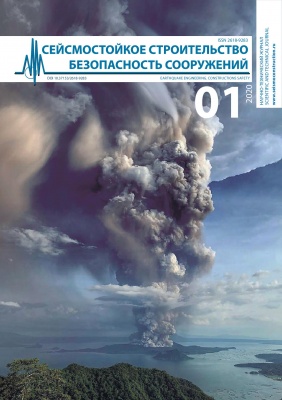 With this work, we start studying of the response of soils of various types (among 11 types of the most representative surface soils on the territory of Russian Federation) in seismic motion, based on in situ observations (KiK-net data). The response of soft sandy and loess soils to weak and medium-intensity seismic motion is analyzed. We show that the response of rather homogeneous soil profiles (without clear seismic boundaries) to seismic motion is frequency-dependent and contains resonant frequencies, at which seismic motion is noticeably enhanced. At stronger seismic motion, the resonant frequencies are reduced, and the amplification of seismic motion by soil layers is also reduced. These effects are not taken into account in seismic rigidity method, the application of which is still required by the Building codes acting in Russia. We should change the practice of application of the seismic rigidity method in the Building codes, by clearly defining the scope of the method, and we should move to the spectral description of the corrections for ground conditions in earthquake resistant construction, by means of response spectra, as done in other countries.


Interaction of a Single Pile with Freezing Heaving Soil

The article is devoted to the study of the interaction of a single pile with freezing heaving soil. The calculation of the pile loading area by the normal pressure of frost heaving is proposed. The cases of pile behavior under the influence of frost heave on it depending on the value of the heave pressure, the freezing forces of the frozen soil and the pile, and the adhesion forces of the anchored part of the pile are considered. The calculation of the radius of the cylinder shifting under the action of soil heaving is given.

The article is about nuclear power plant (NPP) safety analysis in case of aircraft crash. Specifically, the article considers the following problems: inclusion of aircraft crash into NPP design bases regarding calculation of frequency of an aircraft crash into NPP; aspects of justification of loads on NPP structures, systems and components (SSCs) caused by mechanical action of a primary missile – aircraft fuselage impact. Probabilistic characteristics of such random parameters as frequency of aircraft crash and direction of aircraft trajectory are determined by the results of analysis of world statistics of aviation accidents. Method of calculation of aircraft crash frequency on structures, buildings and NPP as a whole is presented. It takes into account options of accidental and intentional aircraft crashes and various aircraft approach scenarios.
Procedure of probabilistic justification of loads on civil structures under aircraft impact is described. The loads are specified so as not to exceed allowable value of failure probability of NPP as a whole. Calculation of failure frequency of civil structures of existing NPP is given as an example to show analysis in case of a crash of an aircraft heavier than considered in NPP design. Procedure of probabilistic justification of dynamic loads on NPP equipment in case of aircraft impact is described. Method of floor response spectra (FRS) calculation with the required non-exceedance probability is given. Probabilistically justified loads in case of intentional aircraft impact (act of terrorism) are also considered. Additionally it is presented how internal forces calculated with the use of FRS with the required non-exceedance probability can be summed to provide analysis of subsystems.

When obtaining ceramic bricks only from low-melting clay with the number of plasticity less than 12 without the use of thinners, there is a sharp drop in the limiting shear stress in the temperature range of 20-80oC, which contributes to the appearance of cracks and
deformation curvatures of products. The use of nanotechnogenic raw materials as a thinner does not contribute to a sharp drop in the ultimate shear stress of the semi-finished brick in the temperature range of 2080oC, eliminates the appearance of cracks and increases the physical and mechanical performance of the finished product. Studies have shown that in order to improve the drying properties of the ceramic mass, the system «nanotechnogenic raw materials-fusible clay-water» is more homogeneous in relation to the system «clay-water». The analysis of the ultimate shear stress in hot forming conditions showed that the function of dependence of plastic strength on molding humidity PM =f (W,t) than the function of dependence of plastic strength on temperature PM =f(t) acquires special importance in this case.

The article provides the results of studies the process of formation and development of plastic deformations in reinforced concrete structures with shear-wall under earthquake excitations. The studies are carried out by numerical methods using nonlinear
dynamic analysis. The results of the research shown: that in the shear-wall elements of reinforced concrete structures the level of plastic deformations should be significantly reduced in relation to the normative level of plastics in other structural elements of the carrier system. The completed studies substantiated the introduction of differentiated values seismic-force-reduction factor for different types of structural elements on shear-walls reinforced concrete structures of earthquake-resistant buildings.

The authors suggest a new procedure of Site Response Analysis (SRA) for the so-called “side” (or additional) soil profiles – Low Boundary (LB) and Upper Boundary (UB). Standards require the analyses of these profiles in addition to the Best Estimate profile (BE) to account for the uncertainty in the input data about soil properties. The authors suggest stopping using the same input time history for all three profiles as a control motion at the surface, because it corresponds to the different physical seismic excitations coming form the depth. This is not in line with the ideology of Standards. Instead the authors suggest using the same time history as a control motion at the outcropped surface of the underlying half-space. This is also not completely correct, because for these three profiles (BE, UB and LB) the underlying half-spaces are also different. However, due to the physical considerations if all half-spaces are stiff enough, the error should not be so important. The effect of the
proposed change is demonstrated on a particular site. The changes in the velocity and damping profiles have proved to be negligible, but the difference in the resulting response spectra at the outcropped surface of the foundation mat has proved to be significant. Generally, the response spectra for the “side” profiles came closer to spectrum for the BE profile. This result reflects the real world logic.

The application of the response spectra method for extended damped systems with a point support on the base is considered. The support excitations can be different. External and internal damping is taken into account, it being assumed proportional i.e. admitting an exact or approximate decomposition of motion according to the undamped system modes. It is noted that the presence of external damping leads to additional system perturbation, i.e. to additional members appearance in the right part of motion equations. It is shown that well-known formulas of the response spectra method for systems on a rigid platform are kept intact, but the vector of load projections on the directions of generalized coordinates is modified taking into account the influence of support displacements on generalized loads in the system.