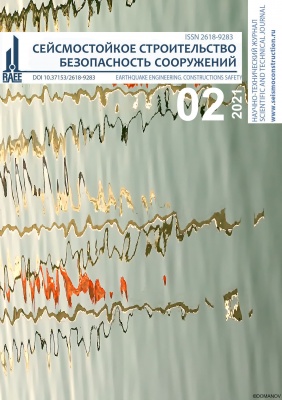 Signs of the "one-mode" response forces in linear spectral method: comparison of conventional and standard approaches

Two variants of linear-spectral method (LSM) are compared in the paper: the conventional one, prescribed in several foreign Standards, and "Standard" one prescribed in the Russian Standard SP 14.13330. "One-component one-mode" responses, obtained by static analysis in the conventional LSM are combined twice: first for different modes but for each single excitation component, then for different excitation components. In the "standard" alternative LSM variant first one chooses the "most dangerous" direction of the one-component excitation for each mode, then one obtains the "one-mode" response for this excitation, and finally these responses are combined. In both cases the combination is performed using the complete quadratic combination (CQC) rule, accounting for the correlation between one-mode responses. "Standard" variant leaves some uncertainty: the "dangerous" direction can be changed for the opposite one. Such a change leads to the sign change in the one-mode response. This is of no importance for the non-correlated responses, which are combined using the SRSS rule. However, for the correlated responses as it is shown in the paper using sample problem the uncertainty in the signs can lead to the incorrect results, and the error can be significant.

The calculation of the stability of the equilibrium position required by the canceled and current norms of earthquake-resistant construction, and the calculation of the dynamic stability of various partial movements, the requirements for the necessity of which are absent both in the proposals for the norms of the new generation and in the current norms of earthquake-resistant construction, are the main ones in the calculation and design of structures taking into account their interaction with the base. Special and emergency seismic loads are identified that create an emergency situation − the occurrence of a mode of beating or resonant vibrations, as well as parametric resonance and nonlinear vibrations that occur after the loss of stability of the position of structures.


Solving a direct problem as a new method of seismic microzonation

The article describes a new type of seismic microzonation, called the method of solving a direct problem. The main methodological technique in this case is the formation of  models of the soil layer on the basis of complex engineering-geological and geophysical studies. An original computer simulation technique based on the use of a short acceleration pulse as theinitial seismic impact is proposed. In the calculations of the increment of seismic intensity, a new formula is used that takes into account all the factors of the influence of soil properties on the parameters of seismic impacts – seismic rigidity, water saturation, resonant effects and the nonlinearity of the reaction of soils to strong seismic impacts. Based on the obtained data, the models of ground layers at the construction site are mapped and the parameters of seismic impacts that correspond to the properties of each model of ground massif are determined. The proposals presented in the article are reflected in the regulatory documents devoted to the SMZ of objects of increased responsibility and territorial planning

Authors:    Ottosha B. Sabirova
Rubric:     Design, building and reconstruction of a seismic constructions

The paper proposes a two-level approach to the calculation of structures for the tsunami effect. The concept of the design tsunami and the maximum design tsunami and their corresponding limit states is introduced. The estimated loads on the bridge piers from the design and maximum design tsunami are estimated, depending on the territory danger and the bridge responsibility. At the same time, bridges, in accordance with the approach adopted in transport construction, are divided according to their degree of responsibility into four categories. A formula is obtained to estimate the design splash value for the design and maximum design tsunami, depending on the bridge category. In addition, graphs are provided showing the frequency of the tsunami and the calculated wave height corresponding to this frequency. To estimate the combination coefficient of wind and tsunami loads, their equally probable pairs are considered. At the same time, the Weibull distribution is used to set the wind load, and for the tsunami load, the distribution given in the Code of Rules for Ensuring Tsunami Safety is used. Taking into account such load pairs is relevant for bridges with high piers, when the height of the splash does not exceed the pier height and there is a high probability of a simultaneous combination of wind and tsunami loads. The paper presents the calculations of surges for two types of tsunamis: the design one with a repeatability of once in 50 years and the maximum design one with a repeatability of once in 500 years for the Kamchatka region and the Kuril Islands for bridges of the first and second categories. Studies show that for the design tsunami and the maximum design tsunami, the coefficients of combinations with wind load differ significantly.


Consideration of the vertical load from a tsunami on bridge structures

A significant part of the territory of the Russian Federation is exposed to various natural disasters. One of the most destructive are tsunami waves. At the same time, for the development of these territories, there is a need for the development of transport infrastructure, which implies, among other things, the design of bridges. To ensure the reliability of bridges in the event of tsunami, it is necessary to fully take into account the possible impacts from these waves. In Russia, there is a document to determine the load from the tsunami. But, despite the existence of this document, the issue of taking into account the loads from the tsunami on various structures remains relevant. In particular, there are no clear guidelines for accounting for vertical loads from tsunami waves on bridge structures. With the help of the studies carried out on computer modelling of the wave roll-up on the bridge structure, this article proves the need to take into account the vertical loads from the tsunami, and also proposes a method for determining its numerical values. This study can complement the basic methodology for determining the loads from tsunami waves on bridge structures and help designers fully account for this dangerous natural disaster.