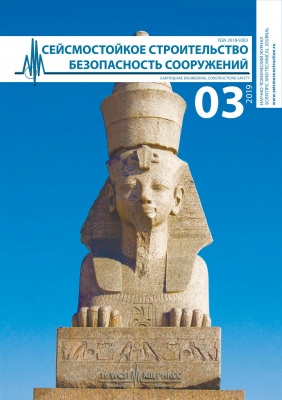 This paper opens the discussion on the «dangerous directions of seismic excitation» concept. This concept is popular for linear spectral analysis in our country. The author compares this approach with conventional «multi-component» approach used in the international practice for nuclear structures. It is shown that in case all components of seismic excitation have similar response spectra, both approaches give similar results, in spite of the principal physical difference in excitations (no correlation between components in the «multi-component» approach versus full correlation in the «directional» approach). The reason of this similarity is a math analogy between SRSS (Square Root of Sum of Squares) rule used for (i) the combination of maximums for the statistically independent functions; (ii) combination of vector’s components along orthogonal axes to get absolute value of vector. Similarity of the component response spectra is commonly adopted for two horizontal axes. However, vertical component usually has different spectrum; therefore the «directional» approach in the initial form cannot be applied. On the other hand, if spectral shapes are not very different (e.g. for the widespread case when vertical spectrum is taken as 2/3 of horizontal spectrum), the «directional» approach can be easily modified. One has to envelop normalized spectral shape curves and also scale participation factors for all natural modes in vertical direction.

The results of reference building (analogous building) research at the seismic isolation site is presented in the study. A system of cross-strips foundations, seismic insulating kinematic foundations and pillars with fluoroplastic gaskets were utilized in building construction. There are stations of engineering seismological measurement services installed on the buildings. It is analyzed the experimental studies for analogous building performed in the late 80s. The results are compared with the earthquake instrumental records happened on August 16, 2014. According to the seismological measurement services the building oscillation period is 0.40 sec, that fully corresponds to data vibration test with a minimum load of unbalances - 0.39-0.42 sec. It has been established that the floor distortions decrease with building height. Mainly the building is deformed by shear scheme. Taking into account the experimental data, a piecewise linear diagram of the deformation of a single-mass dynamic model of a building is constructed.

The results of field experiments to assess the possible influence on seismic safety of structures of seasonal changes in the resonant properties of the underlying subsurface soils are given. The natural frequencies of a ten-story residential building and the surface soil layer were determined from passive (noise) seismic acoustic measurements made at the end of January and the end of June. The results of the experiments showed that in areas with climatic conditions characterized by alternation of long periods of positive and negative temperatures, the resonance properties of the surface soil layer during the year can vary more significantly than the properties of the structures built on them. At certain periods, such changes can lead to the coincidence of some natural frequencies of the soil layer and the structures standing on it, which ultimately  reduces their seismic safety.

About Dynamic Range of SMZ

In this paper, the system of seismic microzoning (SMZ) is considered from an information point of view in the form of a seismic channel, one of the most important characteristics of which is the concept of dynamic range. The question of the value of the dynamic range for each of the applied SMZ techniques is studied in detail. In addition to purely academic interest, the solution of this problem will allow to correctly assess the contribution of various factors (seismic stiffness, spectral features, nonlinearity, etc.) to the total value of seismic intensity and thus contribute to improving the efficiency of SMZ.

Use of Seismic Isolation under Complexes of Close Standing Buildings

This article analyzes the existing solutions for applying special seismic protection to building complexes. The PSTU developed at the “Buildings” department designed model for a number of buildings in a seismic region in the North Caucasus with seismic isolation, made in the form of rubber-metal supports. Preliminary structural calculations have been performed showing that the use of such a seismic protection system helps to reduce the load on the building while saving money on seismic strengthening.